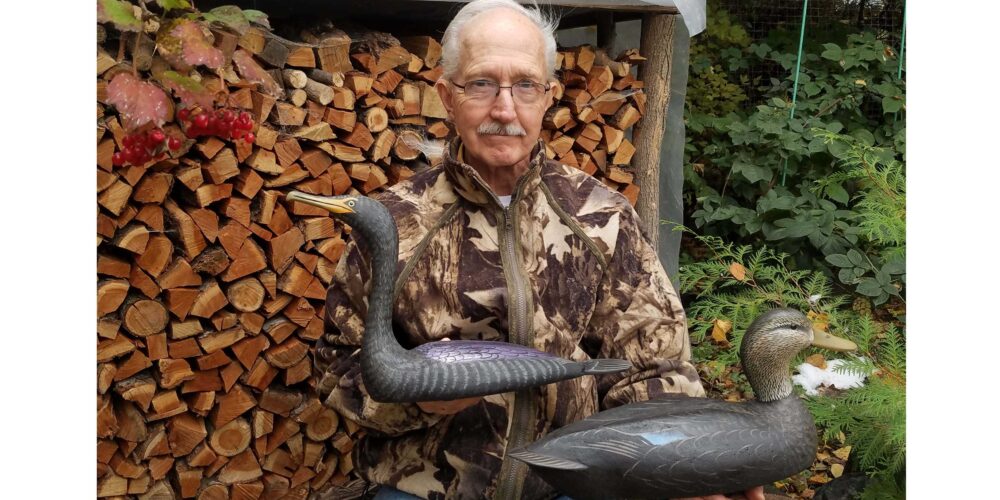 Many thanks to Jennifer Kakatsch for sharing this great presentation of Bob Swann........

Written by: Jennifer Kakatsch, in honor of my dear friend.

Although Bob grew up in the city of Chicago, he found out early on in life that his heart belonged to nature and the outdoors. As a young lad, Bob spent every weekend he could at his families’ summer cottage on the shores of Lake Koshkonong, a lake abundant in game and waterfowling history. It was among this rich bounty that Bob learned to fish, hunt, trap, explore, and study the intricacies of nature.

Bob went on to pursue a career in the aerospace field, eventually moving back to Wisconsin. He took this opportunity to turn his humble family cabin into his permanent home.

Bob has always been a very talented artist, but in 1962 while whittling on a few chunks of wood, he knew he had found his true calling. He immediately traded in his art canvases for carving tools, vises and sandpaper. Occasionally, Bob will still experiment with wood and light-colored cork, but dark cork quickly became his go-to-choice for carving his bodies. After the carving is complete, he then expertly and accurately transforms the blank decoys into works of art with his preferred medium of acrylic paints. Long-time carver Pat Gregory has referred to Bob as “The best dark cork decoy carver he has ever met.”

Carving over 2,000 decoys, Bob has left a legacy in this field that few can match. After great success entering contests and winning countless ribbons, he now judges carving contests, lending his expertise to fellow carvers. He was selected by the National Endowment for the Arts and The Ward Museum of Wildfowl Art to teach classes on his craft, helping to preserve and promote the tradition of decoy carving.

Over the years Bob has had numerous articles written about him and the positive impact he has had on the sport of waterfowling, particularly in the field of decoy art. Along his journey, he has also mentored many students, sharing his time and knowledge to future generations of carvers. His latest apprentice, Mark Kakatsch, says of Bob “He is truly a master of his craft as well as being an excellent instructor.”

Bob has won many accolades over the years, but his soft-spoken and humble words reflect his truest sentiment, “Of all the ribbons I have received over the years, my greatest prize is the simple act of watching a flock on ducks lite into a grouping of my handmade decoys”.

How do you know if you are holding a Bob Swann original? Bob burns his trademark “Swann” emblem on the bottom of each decoy, letting you know that you possess a true piece of waterfowling art.

When not carving, this quintessential old school “marsh rat” lives very lightly on the land. He gathers much of his own food by hunting, fishing, and tending a garden as well as foraging for mushrooms in the forest that he will later add to his homemade turtle soup. He also enjoys volunteering at the Hoard Museum in Fort Atkinson, where he shares his knowledge of his beloved Lake Koshkonong and surrounding areas with fellow history enthusiasts.